I found some new attack surfaces in the macOS PackageKit.framework, and successfully disclosed 15+ critical SIP-Bypass vulnerabilities. Apple has addressed 12 of them with CVE assigned so far. There are still some reports in the Apple’s processing queue. All of them are interesting logic issues, and of course each has a successful exploit demonstration.

PoC in One Line

System Integrity Protection (SIP), aka rootless, is the last line to protect the entire system from malware. There are already some good write-ups about the security feature, so I don’t want to duplicate here. If you are not familiar with it, it is recommended to read the references part at the end of this blog.

Note: SIP Bypass always means the Full TCC Bypass. With the primitive of SIP Bypass, an attacker could replace the system config database TCC.db with a crafted one, to get full control of macOS TCC (Transparency, Consent, and Control).

Moreover, an attacker could get arbitrary kernel code execution with the SIP-Bypass primitive. I did find a new way to do this on the macOS Monterey, but I couldn’t share the exploit here right now, because it is related to another unpatched 0-day.

The system XPC service /System/Library/PrivateFrameworks/ShoveService.framework/Versions/A/XPCServices/SystemShoveService.xpc has the entitlement com.apple.rootless.install, which grants the process permission to bypass SIP restrictions.

The service provides only one method to shove files from one place to another place :

However, there is no check for the incoming clients, and any process can fire the XPC request to the service:

Therefore, we can abuse the service to bypass the SIP restriction.

After I implemented my own XPC client to exploit the issue, I found there was already an XPC client in the system:

The option -X is used to communicate with the system XPC service.

And the option -x is used for the standard XPC service: /System/Library/PrivateFrameworks/ShoveService.framework/Versions/A/XPCServices/StandardShoveService.xpc, which has no entitlements.

The system XPC service isn’t running by default, and it will be launched by clients if required.

The patch above seems perfect, but is it enough ?

The old vulnerable XPC service is still signed with the special entitlement com.apple.rootless.install. If I can launch the old XPC service from the new OS, then it will be exploitable again, I think.

Patch in the AMFI

Now, it stops the old vulnerable XPC service from launching in the latest OS.

First, let’s look for some hints from Console log:

Then we will find it in the function postValidation from AppleMobileFileIntegrity.kext : 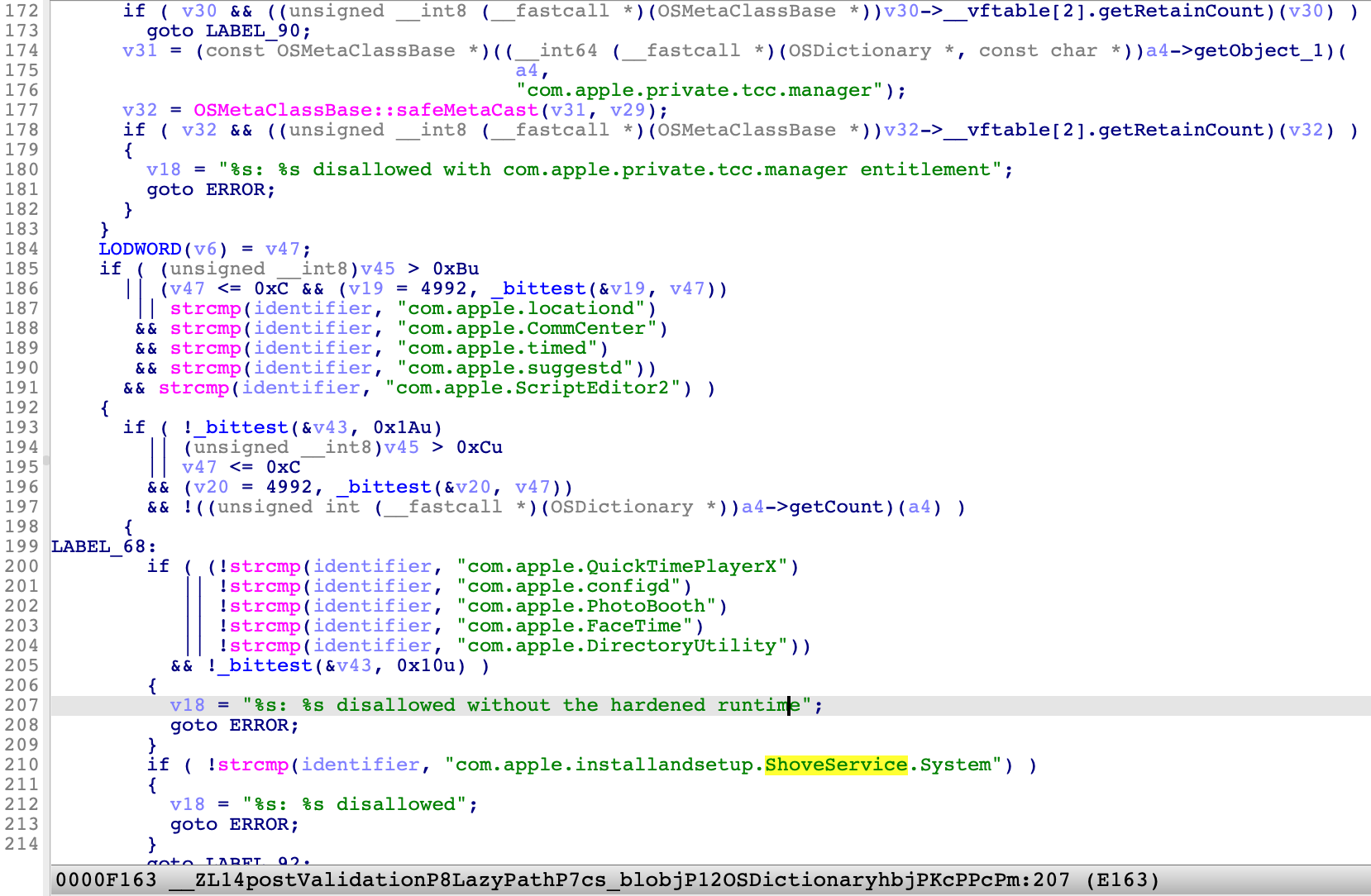 It adds a validation item for the specific identifier “com.apple.installandsetup.ShoveService.System” from its signature.

Note that there are many other application identifiers in the function postValidation! Especially the one at line 201: “com.apple.configd”.

After reading the blog post for CVE-2021-30970 : New macOS vulnerability, “powerdir,” could lead to unauthorized user data access, I didn’t know how Apple fix it, but I could reproduce the issue on the patched macOS!

In short, the system command /usr/libexec/configd has a special TCC entitlement: kTCCServiceSystemPolicySysAdminFiles, which grants the command permission to change a user’s home directory and forge the user’s database file TCC.db. An attacker could inject a malicious dylib into the process to enjoy the special TCC permission.

However, I found the command was still not signed with hardened runtime on the patched OS.

Fail to load the bundle:

If you are curious about the reason, I will write another blog post to uncover what happens under the hood.

Last but not the least, in the latest macOS Ventura Beta version, Launch Constraints defeats this kind of exploitation effectively.